On June 26, 2015, three Japanese national/public/private university organizations (the Japan Association of National Universities [JANU], the Japan Association of Public Universities [JAPU], and the Federation of Japanese Private Colleges and Universities Associations [FJPCUA]) and the German Rectors’ Conference (HRK) signed an academic links agreement at Gakushikaikan (Chiyoda-ku, Tokyo). The signing ceremony was held in the presence of Mr. Masanobu Morita, Director of the Higher Education Policy Planning Division, the Ministry of Education, Culture, Sports, Science and Technology (MEXT), and Minister Robert von Rimscha of the Embassy of the Federal Republic of Germany in Japan.

Indicating a grand design of Germany-Japan cooperative relationships in higher education, the agreement aims to respect individual universities’ independent activities and inter-university agreements. Specific areas of cooperation include the expansion of student/researcher exchange opportunities, the development of joint education programs, the promotion of joint research projects, and the holding of symposiums and other academic events.

So far, Japanese and German universities have held such bilateral events as a symposium in Tokyo in 2006 and a conference of rectors and presidents of universities in Berlin in 2010, during which participants from the two countries shared knowledge and information on the various challenges they face, and exchanged opinions. The recent conclusion of this agreement between Japanese national/public/private university organizations and a German university organization is expected to further promote bilateral academic exchange.

Signing of the agreement 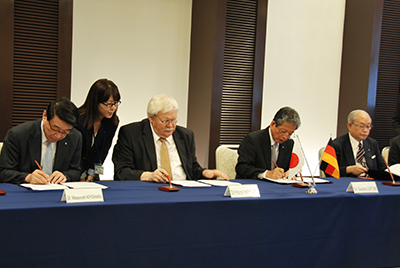 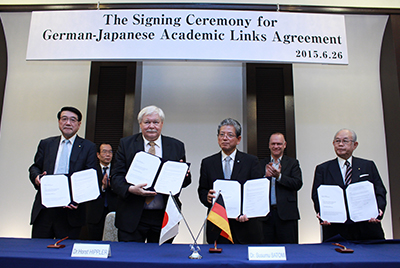 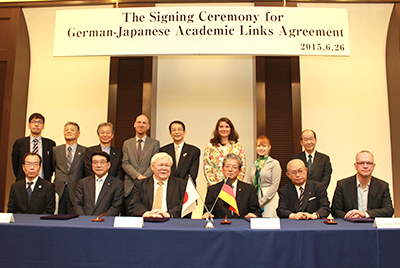