On September 3, 2015, the Japan Association of National Universities (JANU) signed an academic links agreement with Universities Australia (UA), a consortium of Australian universities, in Canberra, Australia. The signing ceremony was attended by Vice President Nagata of JANU (President, the University of Tsukuba) and Deputy Chief Executive Lansdown of UA, and in the presence of Deputy Minister Maekawa of the Ministry of Education, Culture, Sports, Science and Technology (MEXT), and Deputy Secretary Borthwick of the Australian Department of Education and Training (DET).

This agreement covers Japanese national universities that belong to JANU and Australian universities that belong to UA. The areas of cooperation include information sharing regarding higher education policies in both countries, accreditation of qualifications, exchange of students and faculty, and research collaboration. As for accreditation of qualifications, the agreement stipulates admission requirements for undergraduate, master’s and doctoral programs, based on respect for the autonomy of each university. As the first project under the agreement, exchange of administration staff members between universities in Japan and Australia will be conducted in this autumn.

In 1992, JANU concluded an agreement with the Australian Vice-Chancellors’ Committee (AVCC), the predecessor of UA, and has since held symposiums and other academic events jointly with public and private university organizations. This agreement represents the fourth renewal of the 1992 agreement, and sets out the content of cooperation more specifically. The conclusion of this agreement is expected to further promote bilateral academic exchange between Japan and Australia. 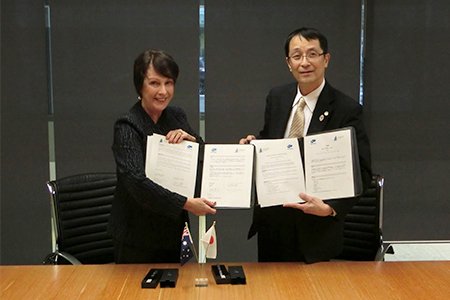 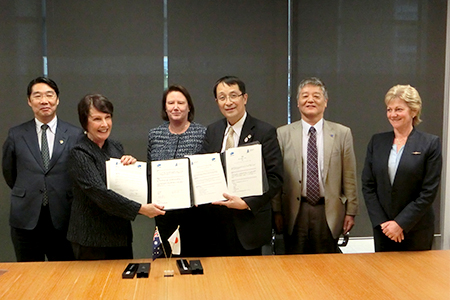